Impacts of Air Pollution upon the Forest Environment 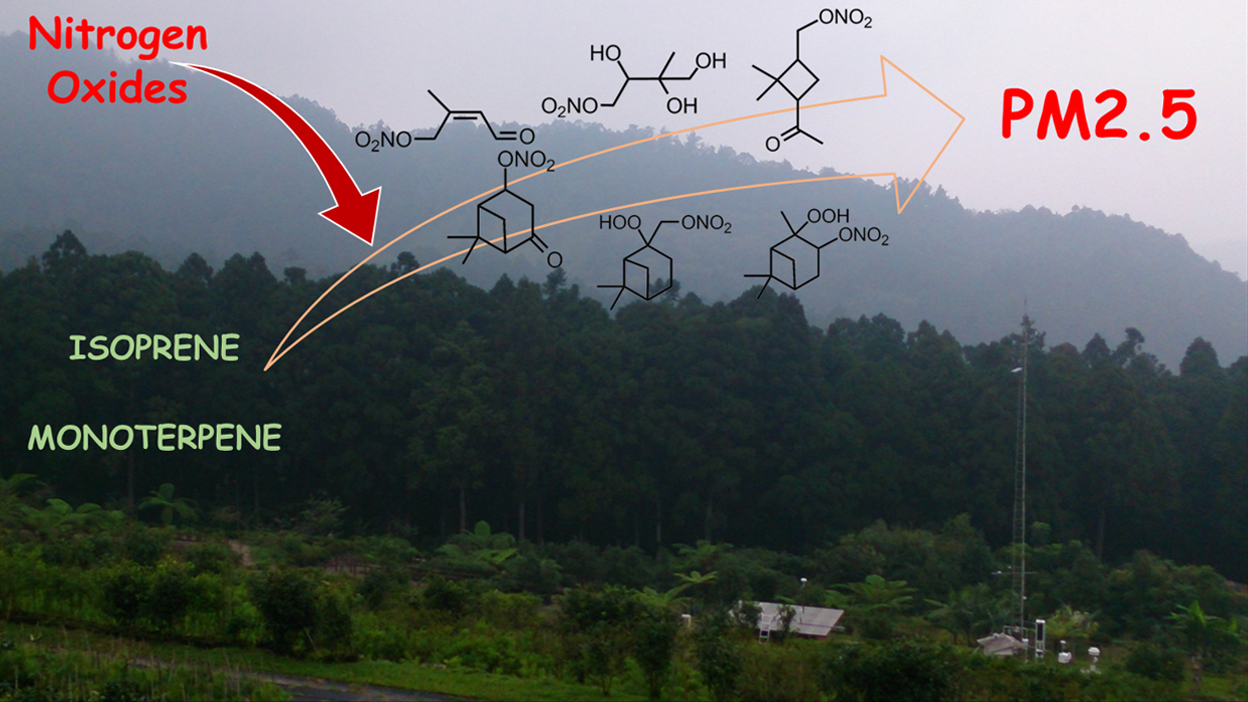 Isoprene (C5H8), monoterpene (C10H16) and the terpenoids are volatile organic compounds emitted from plants, which are among the essential components of phytoncide. The nitrogen oxides (NOx) from anthropogenic air pollution can be transported to the forest and react with those highly reactive organic molecules over there. The reactions will transform the phytoncide into organonitrates, which in turn contribute to the mass of fine particulate matters (PM2.5).

In a forest, plants emit a number of highly reactive organic gases into the atmosphere. The major species include isoprene (C5H8), monoterpene (C10H16) and other terpenoids, which are also known as the essential components of phytoncide. These biogenic volatile organic compounds (BVOCs) make the forest atmosphere chemically active. Besides, scientific studies also suggest that exposure to phytoncide is helpful to our health. Because of the rapid expansion of major cities, the urban areas in Taiwan have been very close to the western slope of the Central Mountain Range (CMR). Consequently, urban air pollutants can be transported by the atmospheric circulations and intrude into the natural forest areas. What are the impacts of the air pollutants on the natural forest environment?

Scientists from the RCEC and the Experimental Forest of National Taiwan University have had a long-term study on the air pollution in forest environment. It was found that the air pollution in the Central-Western Taiwan can be transported by the orographic winds to the Xitou Forest, which located downwind the Taichung Metropolis and at around 1200 m (above sea level) on the western slope of the CMR. Significant impacts on air quality have been observed. This study has deployed mass spectrometry to investigate the molecular composition of organic submicron particles (PM1) collected in Xitou. It was revealed that the particles contained a significant amount of organonitrates, which were characterized by the molecular skeletons of either isoprene or monoterpenes. The molecular profiles suggest that the reactions between NOx and BVOCs are the major pathways responsible for the production of those organonitrates. This finding evidences the active interaction between air pollution and the biosphere. Anthropogenic NOx and natural BVOCs are transformed together into organonitrates, which evolve quickly into aerosol particles because of their extremely low volatility. Consequently, the health-beneficial phytoncide are transformed to PM2.5 that is harmful to our health. Moreover, the BVOCs are known to have their specific ecological function in a forest. The consumption of BVOCs by air pollution will reduce the ambient levels of those functional compounds in a forest area, which could cause negative influences on the forest ecosystem.