Impact of River Dust on the Air Quality 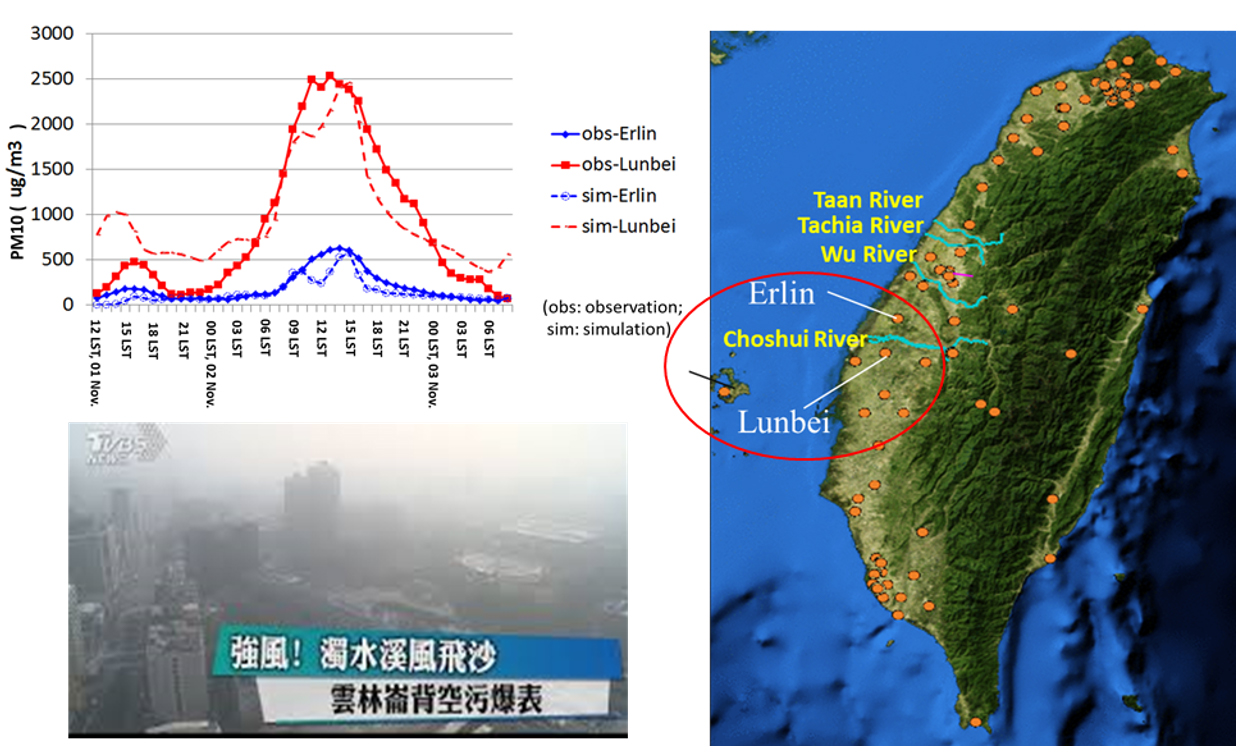 Winter monsoon is commonly recognized as the major drought season in the western plain of Taiwan. Dry atmospheric condition and strong wind can easily blow up dust from riverbeds, thus affecting both local visibility and air quality 。(photo was taken from TVBS news)

In Taiwan, river dust is a common phenomenon caused by strong winds under certain drought atmospheric conditions such as winter monsoon, foehn winds and even typhoon circulations.

River dust has severe impact on air quality in western Taiwan under prevailing strong northeasterly winds during passage of cold fronts. Data showed that river dust in western Taiwan from November to April came mainly from Choshui River (CS). The difference in mean seasonal concentration of river dust upstream of CS at station Erlin (EL) and downstream at station Lunbei (LB) could be as high as 14.2 µg/m3 during northeasterly monsoon from 1994 to 2015. A major river-dust event with unprecedented PM10 concentration occurring in western Taiwan on 2 November, 2009 was examined to understand further the mechanism behind its occurrence and impact on air quality. Weather conditions of 1-2 November, 2009 showed a clear pressure gradient in a strong baroclinic environment associated with a prevailing strong continental outflow (northeasterly, >= 12 m/s) that lasted more than 30 hours over the coastal area of China. On 2 November, 2009, the peak concentration of PM10 concentration was 600 µg/m3at EL but exceeded 2500 µg/m3 at LB. While wind speeds of these two stations were comparable, the PM10 concentration at LB was more than four times that at EL due to dust blown up from CS riverbed. These findings could be reasonably captured by the WRF-Chem model. Strong wind did not favor vertical diffusion of river dust, thus trapping it below 200 m in height and causing severe dust concentration at near-surface level. Besides high wind speed, dry atmospheric and surface drought conditions also contributed to increase river dust suspension in the air. The results and methods obtained in this study can be applied to other regions of similar environment and with comparable relief.