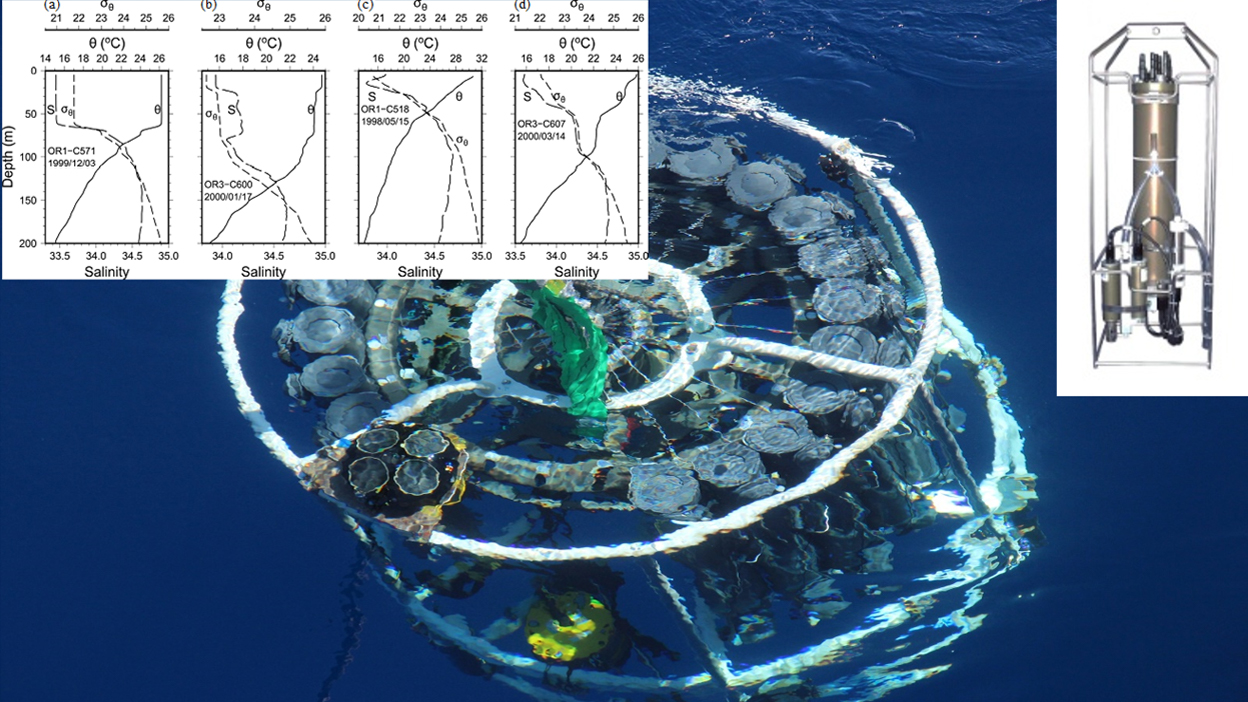 Figure Caption: Rosette Water Sampler and Conducivity-Temperature-Depth (CTD) at sea. Oceanographer use it to sample water and measure physical parameters (e.g. temperature, salinity and so on). (Photographer: Mr. Kuo-Yuan Lee, RCEC, AS) The insert figure on the upper right is SEB911 plus CTD. The insert figure on the upper left shows principal catalogs of hydrographic profiles at SEATS station.

The mixed layer, the thin, nearly isopycnic surface layer, is a distinct and important sub-environment in world’s oceans. It separates the atmosphere from the deep ocean, and thus, modulates, if not regulates to a significant extent, the exchange of energy, momentum and matter between the two. In mixed layer, the light is relatively sufficient and sea water temperature is warmer than that in deep water, providing excellent physical conditions for phytoplankton photosynthesis. Once higher nutrients input into mixed layer, it will promote phytoplankton growth and material circulation. Therefore, understanding the variation of mixed layer depth and its corresponding mechanism is an important issue in oceanography.

The mixed layer thickness, or the mixed layer depth (MLD), is primary mixed layer characteristic that determines it reservoir size and its effectiveness in isolating the deep ocean from the atmosphere. The oceanographer usually estimate MLD from a hydrographic profile (e.g. temperature profile – sea water temperature as a function of depth) conducting by CTD as show in Figure above.

Since 1999, a long-term observation station – SEATS station (The Southeast Asian Time-Series Study station) has been established in the northern South China Sea with the support of the Ministry of Science and Technology. Domestic oceanographers have long been to SEATS station to sample water and physical oceanographic data. To date, nearly 20-year time series data have been accumulated. The variability of the upper water hydrographic structure, the efficacy of the different schemes for estimating the mixed layer depth (MLD), the inter-comparability estimation of the MLDs and diurnal and intra-seasonal MLD climatology in the tropical waters in the northern South China Sea were accessed. The hydrographic structure may be sub-divided into three principal types: classical, stepwise, and graded. Out of the 10 schemes for estimating the MLD, only the fixed temperature difference method of 0.5 and 0.8C from 10-m temperature yielded consistent results. MLD varied diurnally with an averaged standard deviation of 4 m from the mean. The monthly average MLD reached a maximum of 80m in December/January and dropped to a minimum of 25 m in May. Different mixed layer depth may have an impact on marine biogeochemical parameters.