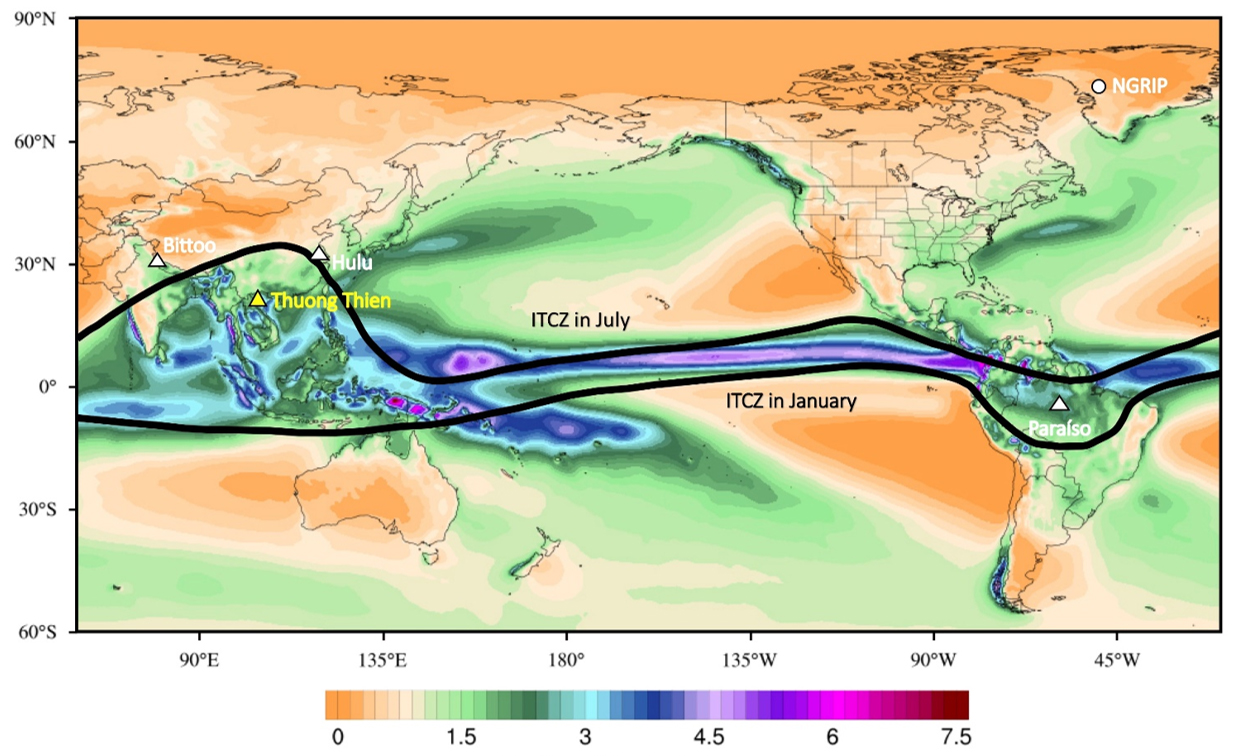 Geoscientists are trained to use the present as a key to realize the past; however, they also believe the past is a key to predict the future. Speleothems are known as one of the best archives of paleoclimate, which have the advantages of robust chronology, long durations and high temporal resolution. Well-chosen speleothems can provide reliable and continuous terrestrial records on par with ice core records in temporal resolution. According to previous studies, speleothem δ18O values in low latitudes are predominantly governed by precipitation change, reflecting the history of monsoon intensity. In this study, a speleothem-based monsoon record covering 30-22.7 thousand years ago is generated from northern Vietnam (TT-3), where the modern climate is mainly governed by the ASM. With 230Th dates in precision as good as ± 62 years, TT-3 record provides a rare opportunity to examine the details of paleoclimate change in Southeast Asia region.

For the paleoclimatic study, North Atlantic is regarded as the initiation of climatic millennial-scale events (MSE) in the late Quaternary, such as Dansgaard–Oeschoger(D-O) Oscillation and Heinrich events.  The D-O events are characterized by a rapid change to warm condition followed by a gradual cooling in the North Atlantic; while the Heinrich events are related to glaciological iceberg discharge into the North Atlantic, corresponding to the coldest intervals between D-O events.  These MSEs were globally influential according to the records elsewhere in the world.  The Asian summer monsoon (ASM) also correlated with Greenland stadial-interstadial events in the last glacial period, which can be retrieved from various paleoclimate archives over the Asian continent including the speleothem.

The variation of our TT-3 δ18O record is generally similar to the records from Chinese and Indian stalagmites, with three MSEs nicely correlated with the D-O events identified in the Greenland ice core.  However, we observe that the onset timing and structure of D-O 4 varied spatially. The event seems having an early commencement and happening less abrupt at sites closely connected to the modern Intertropical convergence Zone. It emphasizes the importance of the Tropics on global climate system. In addition, our decadal-resolution record clearly demonstrated a few centennial events with a duration of ~200 years, which probably correlates with the solar activity.  It thus implies the potential role of cyclic solar activity in controlling ASM intensity on centennial timescale.