The atmospheric water vapor has the large variability both horizontally and vertically. In additional to these, the change in time domain could be significant in some scenario. For example, there were up to 40 mm in the change of total precipitable water within an hour in Taiwan before the severe afternoon thunderstorm. It also exists different phases of liquid, ice and gas which increase the changelings during the estimation the water vapor amount in the atmosphere. The condensation of water vapor has the interaction with the atmospheric particulate matter, which is highly nonlinear with various type and hydroscopic characterizes of the aerosols in different temperature, humidity and pressure. This introduce the complexity of the cloud to precipitation processes. Therefore, we need to obtain the accurate information of the atmospheric water vapor so that the related study could be conducted.

In this project, we would like to use the satellite remote sensing data to infer the atmospheric water information in a near-real-time basis. The geostationary satellite could offer continuous observation in time and spatial domains. Thought the assist of the AI-based technique, we improve the current estimation of total precipitable water by using both satellite and in-situ observation synergistically. The data will conduct a serious of intercomparison among FORMOSAT-7, Korean geostationary satellite GK-2A to identify the uncertainties. Other than these, we also include the ground-based radiometer, GNSS ZTD data in the intercomparison. The radiosonde from RV cruises in the South China Sea and the dropsound in the typhoon scenario will investigate in the project as well. This bilateral project is funded from both Taiwan MOST and Korea National Research Foundation of Korea for two years from January 2022 through December 2023.

Higher pollutant concentrations occur in Asia and the Pacific region compared to the rest of the world; in addition, different annual averages among different countries make an international comparison of exposure-health relationship really interesting since health damage coefficients in different exposure ranges can be assessed and compared internationally. The synthesis of these findings can provide policy-relevant recommendations for countries in this region where health risk reduction is urgently needed.

Hi-ASAP initiative has been developed under the umbrella of International Global Atmospheric Chemistry project - Monsoon Asia and Oceania Networking Group (IGAC-MANGO). The main goal is to provide scientific evidences to support effective policy actions to reduce air pollution levels in this region by applying newly developed low-cost sensors (LCS). Dr. Candice Lung at RCEC is leading this effort right from the beginning. Research groups including both atmospheric chemists and public health scientists from 10 countries in Asia are currently involved. Under the support of Center for Sustainability Science, Academia Sinica, symposia/training workshops have been organized to share technology and methodology since 2016 to support this research direction.

Moreover, LCS for air pollution and health evaluation are crucial research equipment for these countries in Hi-ASAP which will be provided by RCEC. The advantages of low-cost, lightweight, and easy deployment make LCS an indispensable scientific tool for such researches. The other countries will contribute local staff and efforts in field studies. The same methodology for evaluating exposure-health relationship is used by all research groups to conduct studies with a common database maintained by RCEC. This collabration was presented in Lung et al. 2022. Up to now, three research groups have begun to collect data even under the influence of COVID-19. It is expected to collect data for another two years. International comparison, synthesis papers, and policy impacts are expected as the outcome of Hi-ASAP.

The Earth system model (ESM) is the state-of-the-art tool to understand and evaluate the impact of anthropogenic warming on the weather and climate and the possible changes in the future. However, the development of an ESM requires formidable human and computer resources. To integrate the world’s climate research, the Working Group on Coupled Modeling (WGCM) of the World Climate Research Programme (WCRP) of the United Nations and the World Meteorological Organization initiated the Coupled Model Intercomparison Project (CMIP) to coordinate the major climate research centers around the world to conduct simulations systematically for the following topics: (1) improving model ability by comparing the performance of all climate models; (2) quantifying the impacts of natural and anthropogenic factors on climate change since the Industrial Evolution; (3) Developing various climate change scenarios for emissions of greenhouse gases and aerosols for simulations of climate projections. The 4th and 5th Assessment Report (AR4 and AR5) published by the Intergovernmental Panel on Climate Change (IPCC) of the UN were based on the results of CMIP phase 3 and phase 5 (CMIP3 and CMIP5).

The researchers of the Research Center for Environmental Changes (RCEC) of the Academia Sinica have developed the Taiwan Earth System Model (TaiESM) based on the Community Earth System Model (CESM) of the National Center of Atmospheric Research (NCAR) of the United States. Several innovated physical and chemical processes, including deep convection, cloud fraction, aerosol, and surface solar radiation, are incorporated to improve the simulation of climate variability. RCEC has participated in CMIP6 by submitting TaiESM simulations of historical changes and future projections for the physical science basis of IPCC AR6, which is already published in August 2021. While the main part of CMIP6 is concluded, several branch projects, CMIP6-endorsed MIPs, are still in progress to investigate the mechanisms and controlling factors of climate change and variability. RCEC will keep conducting simulations for these branch projects and related studies.

In order to understand the impact of marine biogeochemical effects on climate change, it was initiated by the Scientific Committee for Ocean Research (SCOR) in 1987. The Joint Global Ocean Flux Study (JGOFS) was launched by more than 20 countries around the world and was established 8 time-series stations were used to study the changes of the carbon cycle and its control mechanism at different scales, time and space. The South China Sea time series station established in 1998 is one of them, also known as the Southeast Asian time series station (SEATS), operated by TAIWAN. The SEATS time-series station is located at 18° N, 116° E about 700 km southwest of Taiwan, in the South China Sea (SCS), the largest ice-free marginal sea in the world (the ice-covered Arctic Sea is the largest). It has a wide continental shelf to the south, significant runoff from several large rivers, including the Mekong River and the Pearl River, and a deep (>3000 m) basin. The SCS is unique for its very shallow mixed layer, resulting from a strong halocline. In addition, the SCS is subject to the action of strong internal waves. Physical disturbances, including low pressure fronts, monsoon, typhoons and internal waves, may easily reduce water column stability and enhance vertical mixing, and, in turn, the pumping of inorganic nutrients from deep water to the surface. 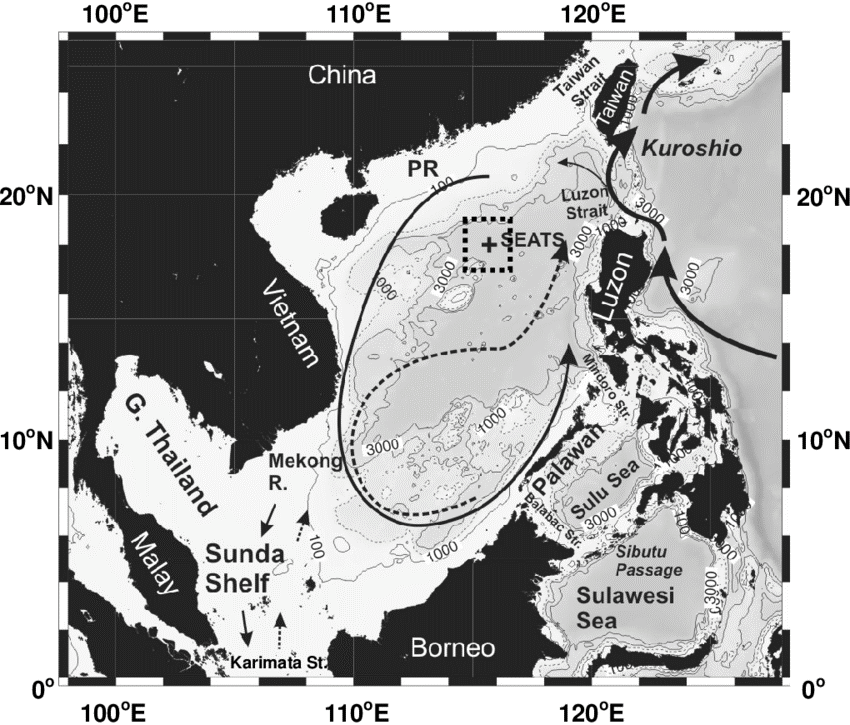 GEOTRACES is a prestigious international program focusing on trace element and isotope study in the ocean. There are almost 30 countries involved in the project. GEOTRACES has achieved many significant scientific accomplishments in oceanography. The research funding of the project mainly comes from the support of scientific research budget in each country. Funding for international scientific meetings and logistic expenses are supported by SCOR (Scientific Committee on Oceanic Research). Dr. Tung-Yuan Ho from RCEC was elected as a Science Steering Committee (SSC) member in 2011 and had served as the SSC member for 6 years (2012-2017). Dr. Haojia Ren from National Taiwan University was later on recommended by Dr. Ho as Taiwan’s representative and was also successfully elected as a SSC member. Dr. Ho has led Taiwan GEOTRACES process cruises and related studies, focusing on aerosol trace metal biogeochemistry in the ocean. Through GEOTRACES platform, Dr. Ho have established close collaboration with leading research groups in Japan. In 2018, Dr. Ho successfully hosted GEOTRACES SSC meeting and training workshop at Academia Sinica, https://www.geotraces.org/ssc-2018/. Dr. Ho has received support from Academia Sinica and NSTC for GEOTRACES research. Drs. Ho and Ren have recently organized national GEOTRACES research team and have successfully requested 18-days NOR1 R/V cruise time to carry out GEOTRACES research in the Northwestern Pacific Ocean and its marginal seas in August 2023. We expect that the study would obtain significant understanding on how anthropogenic and lithogenic aerosols influences material cycling in the ocean.